If you are looking for movies in German to help you learn the language, you’ve come to the right place. We have put together a list of 10 excellent German movies with subtitles to get you started.

You can watch these movies on:

Oh, by the way, if you’re interested in learning German by watching German movies then check out Lingopie, a language app that teaches German through movies and TV shows. They offer a free 7 Day Trial for all users. You can read our LingoPie Review here.

German dialects and slang are key to understanding the German language. With around 50 dialects, there are between 50 and 250 dialects in Germany.

One way to acquire an ear for these everyday regionalisms and boost your language skills is to learn German through music.

However, one of our favorite way to learn real German is through German films. 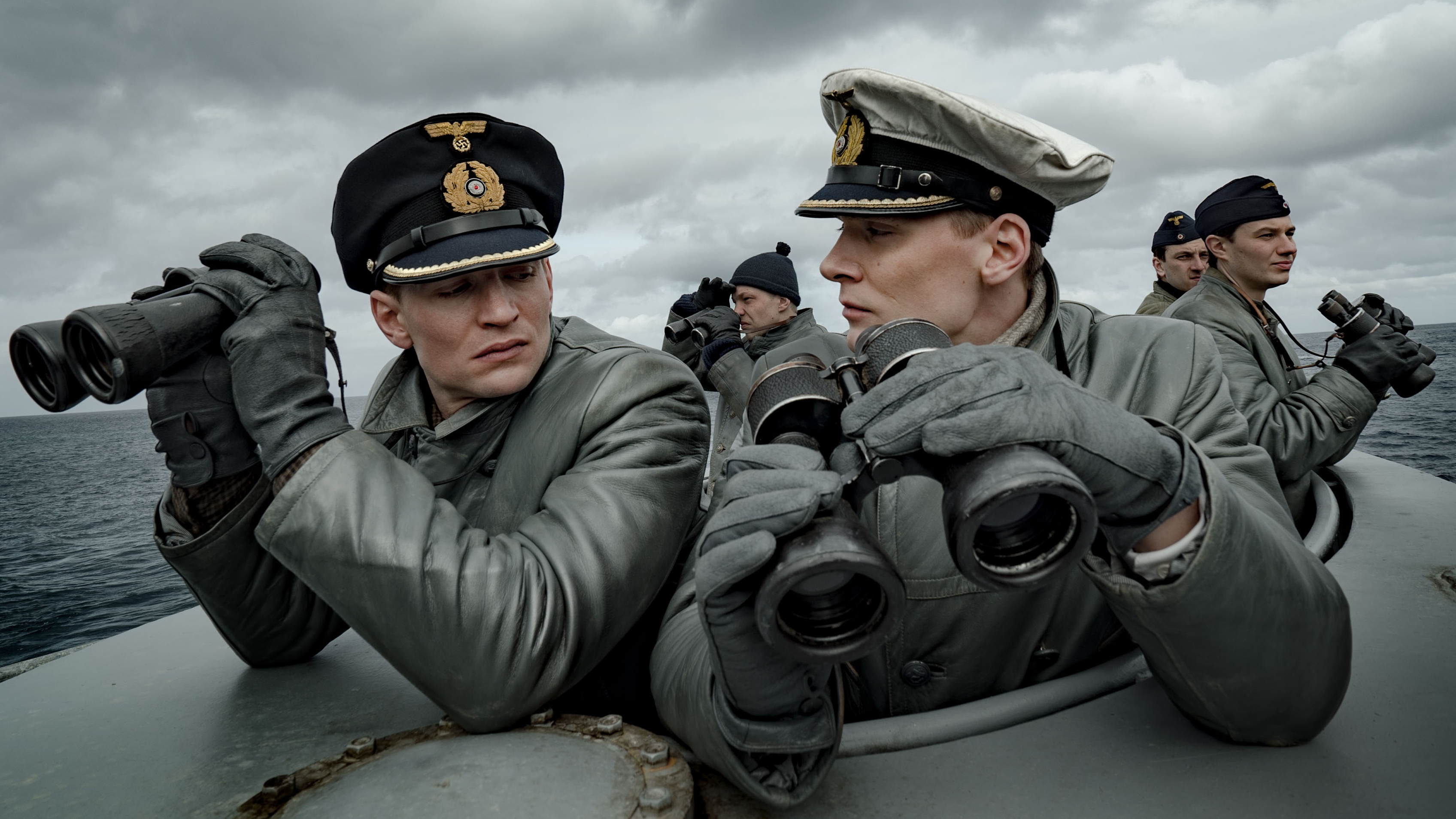 The story is about a German submarine fighting the Allies in 1941. The film is rich with World War II references and military – German language dialogue that you may not normally hear while walking around the streets of Frankfurt!

The Story is gripping, tense, and will leave you somewhat claustrophobic. Almost all of the movie takes place below sea level.

Why do we recommend Das Boot as one of our movies to learn German?

Easy to find with English subtitles for all learners Run Lola Run is a 1998 German thriller that takes place in Berlin. The main character has 20 minutes to recover 100,000 Deutschmarks in 20 minutes.

This movie is geared towards a younger generation and includes lots of fun slang and phrases. It’s like Crank meets Sliding Doors (with Gwyneth Paltrow) – but in German!

If you’re interested in Berlin, the movie will be the right one for you. It was filmed in and around Berlin and gives you an idea of not only what the city is like, but also what the local German dialect sounds like.

Why do we recommend Lola Rennt as one of our movies to learn German?

Available with subtitles in multiple languages

An entertaining watch particularly for beginners 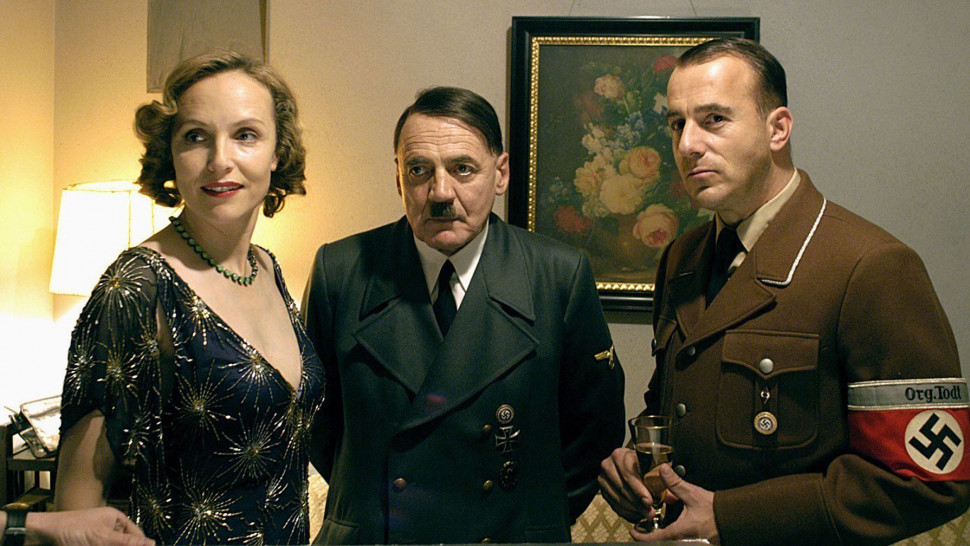 This controversial but fascinating portrayal of Hitler will have you white-knuckling your sheets. Actor Bruno Ganz is known to have prepared intensively for his portrayal of the Führer.

He watched videos of Hitler in preparation for the role and in order to imitate the accent (which is actually Austrian, not German) perfectly.

This movie is based on the last 10 days of the Fuhrer’s life during the Second World War in what later became East Germany. It has been released in cinemas in the UK, Australia, Canada, and Germany.

Why do we recommend Downfall as one of our German movies?

Easy to find with English subtitles

Das Experiment is one of our favorite German movies. This German thriller is based on a novel called Black Box.

The storyline is as follows: 20 male participants are hired to play prisoners and guards in a prison. The ‘prisoners’ have to follow seemingly mild rules, and the ‘guards’ are told to retain order without using physical violence.

Half of the participants chose to pose as prison guards and the other half as their prisoners. When the guards kidnap Tarek after a few days into the project, the situation escalates.

The drama blurs the fine line between play-acting and reality beyond recognition.

Why do we recommend Das Experiment as one of our German movies?

One of the most famous movies in Germany

The German Democratic Republic is torn down one year after Mauer Wall falls. A boy takes part in anti-government demonstrations in Berlin.

His mother suffers a heart attack and wakes up in a coma. To hide from her, Alex pretends that nothing has changed and tries to hide it from her.

This tragic-comedy will have you laughing your socks off, but it’s also about the transition of the nation to capitalism, a key part of Germany’s modern history.

The cast includes several of the German’s most popular actors, including Daniel Brühl, Katrin Saß and Chulpan Khamatova.

Why do we recommend Good-bye Lenin as one of our German movies?

Different genre from the others

Highly entertaining viewing for learners of any level

This is one of our favorite German movies. Das Leben der Anderen is the feature film debut of Florian Henckel von Donnersmarck.

The storyline is about the monitoring of East Berlin residents by agents of the Stasi, the GDR’s secret police.

It is a suspense filled plot meticulously set in a dark period of German history.

Why do we recommend Das Leben der Anderen as one of our German movies?

Easy to find with English subtitles

After World War II, East Germany and most German territory fell into the hands of the Soviets (the USSR).

The area remained under Soviet control throughout the Cold War period, until the fall of the Berlin Wall in 1989.

Many German films are set during this fascinating period of history. 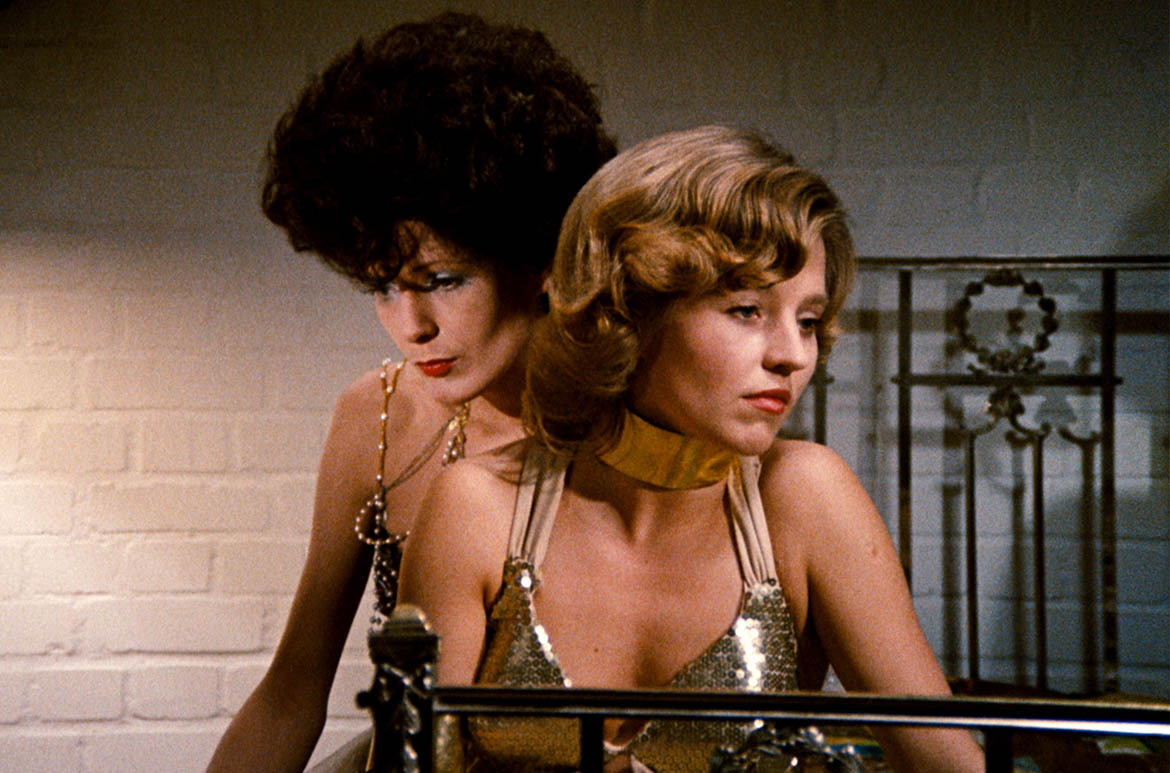 This German language movie is another German classic and a great introduction to German cinema.

The storyline? Rainer Werner Fassbinder creates an insular dreamland of jealously, madness, and domination set only within the walls of Petra von Kant’s home.

The film exposes you to the quirky and cute Bavarian accent via the elusive Karin. If you’ve travelled to the south of Germany, this film will help you to pick up on the German language nuances within this part of the country.

Be sure to take notes throughout!

Why do we recommend The Bitter Tears of Petra von Kant as one of our German movies?

Exposes you to the Bavarian variant of the German language

Shows how beautiful Bavaria is! 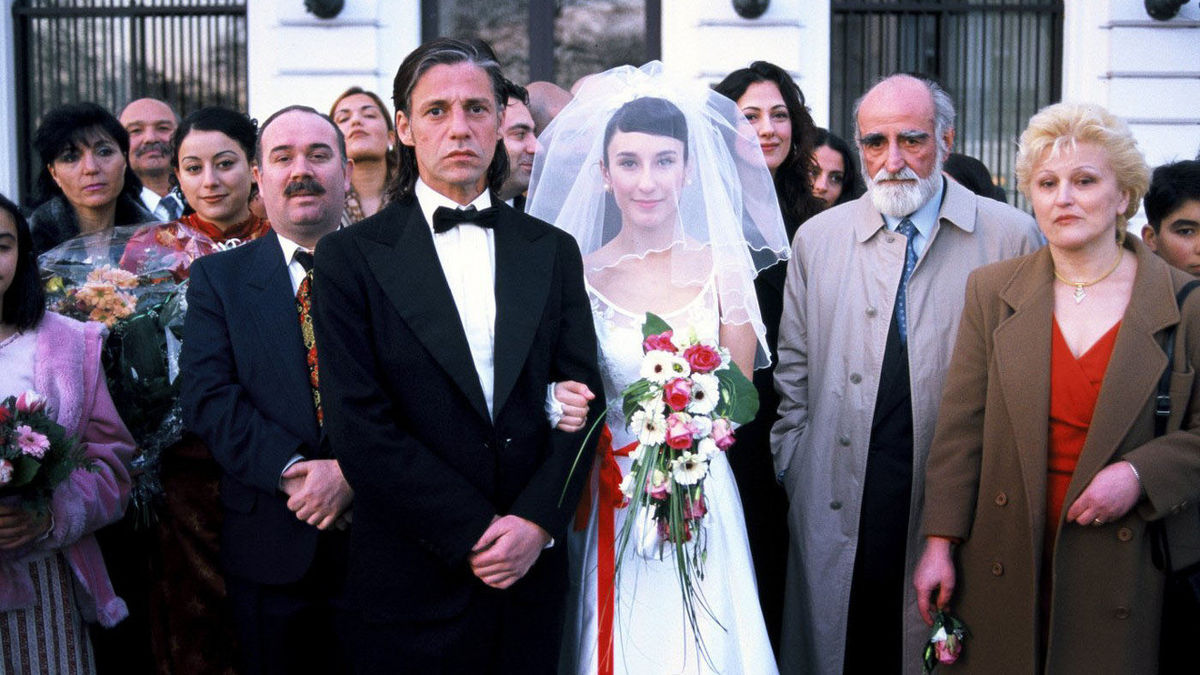 This German movie is about Turkish-German culture clash. It’s a story of two brothers who are very different in temperament and life choices, but somehow always manage to find their way back to each other.

Head-on is the first full length film from filmmaker Fatih Akin. The movie was awarded with the Golden Globe Award for Best Foreign Language Film and European Films Awards for Best Director 2005.

Head On has been screened at over 250 international film festivals worldwide since 2004 where it won more than 80 awards including the Grand Prix (the main prize) at Cannes Film Festival 2004, three César Awards in France (Best Actor, Best Supporting Actress, and Best Music), an Academy Award nomination – 2006 Oscar winner as best foreign language film.

Why do we recommend Head-on as one of our German movies? 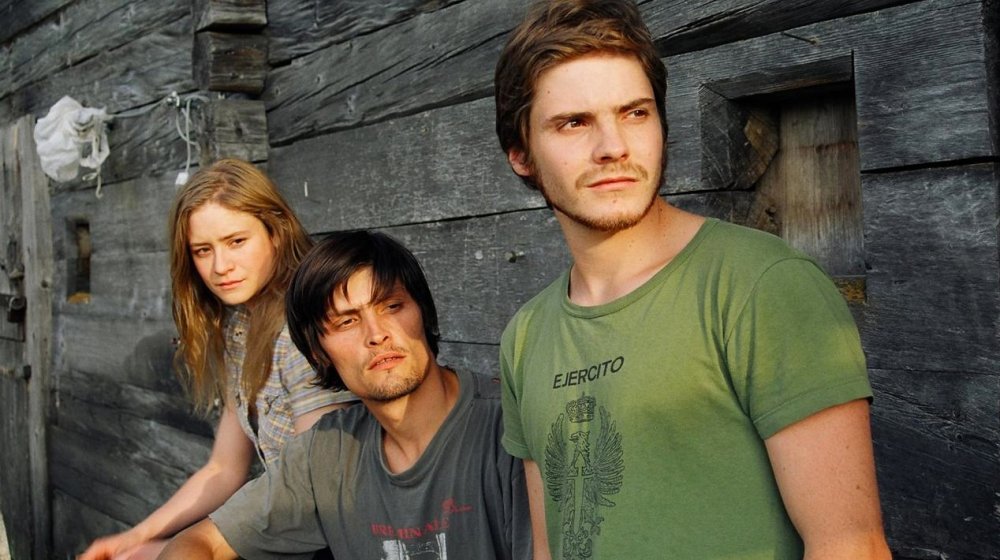 The Edukators is a 2004 adaptation of a novel. It is a darkly comic story about three West German activists who decide to start robbing department stores, ostensibly in order to redistribute the money.

However, their plan goes wrong when they get caught and have no other choice but to go on the run from authorities while trying not betray their radical beliefs.

This German movie focuses on general conflict, following the lives of anti-capitalist youth fighting the system in a provocative way.

Why do we recommend The Edukators as one of our German movies?

Modern film which is easy to watch 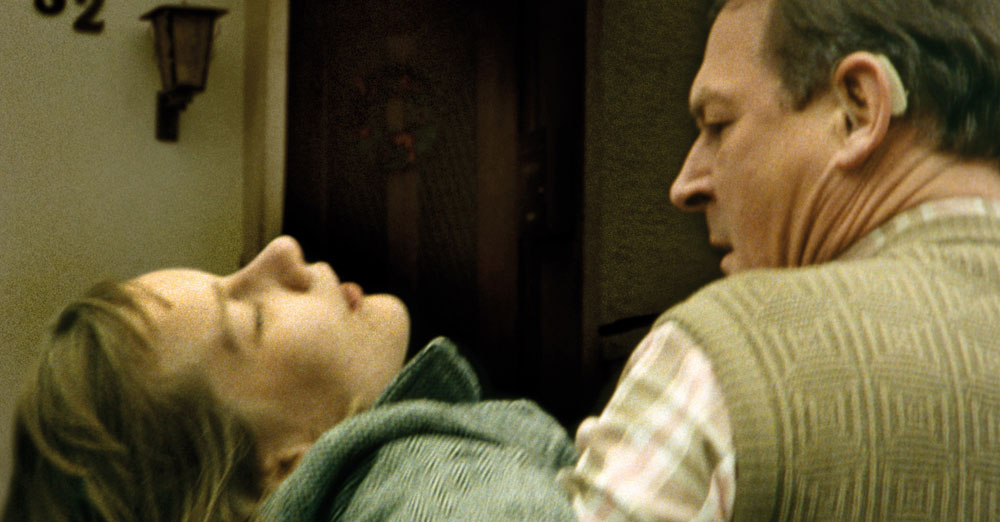 The story begins when Georg (Ernst Jacobi) moves into his new flat and meets next-door neighbor Anna (Ulrich Muhe). Despite their age difference – he is 75; she 14, they form a special bond.

The narrative is about Georg and Anna’s relationship developing, which is made difficult by his age difference to her, as well as Annas father who may not permit their friendship.

This film also explores how most people are unable to relate to each other because they don’t understand enough about the other.

Why do we recommend Requiem as one of our German movies?

Modern film which is easy to watch

Tips on Learning German through Movies

FluentU is one of the best websites and apps for learning German the way native speakers really use it.

Using real-life videos, the content is kept fresh and current and interactive. It keeps track of the words you’re learning and gives you extra practice with difficult words.

It also reminds you when it’s time to review with the multimedia flashcards. You’ll find our review below and the opportunity to trial the app free of charge.

Does Netflix have movies in German?

The answer is yes.

On their global website, Netflix has a limited selection of movies in German on its TV and Films section.

They have some popular shows like “Parks and Recreation” but they don’t have many good films or documentaries.

There are, however, several entertaining TV sitcoms and programs.

We recommend going to another streaming service for good German films that will keep you entertained whilst you learn.

Will watching German movies help you learn a language?

Yes. Watching movies in a foreign language is one of the best ways to pick up and learn vocabulary, idioms and cultural references that are necessary for fluency.

Even with subtitles, it is beneficial to watch foreign language films as you become more used to listening to the German language (or any language you happen to be learning).

Don’t watch dubbed versions of films. This won’t help you!

How can I watch German movies with English subtitles?

If you want to watch German films with English subtitles, we recommend signing up to a streaming service like Amazon Prime or Netflix.

Both offer free trials so you won’t need to commit financially at first.

If you download films via other sites, you are not guaranteed good quality of the ability to switch on English subtitles. 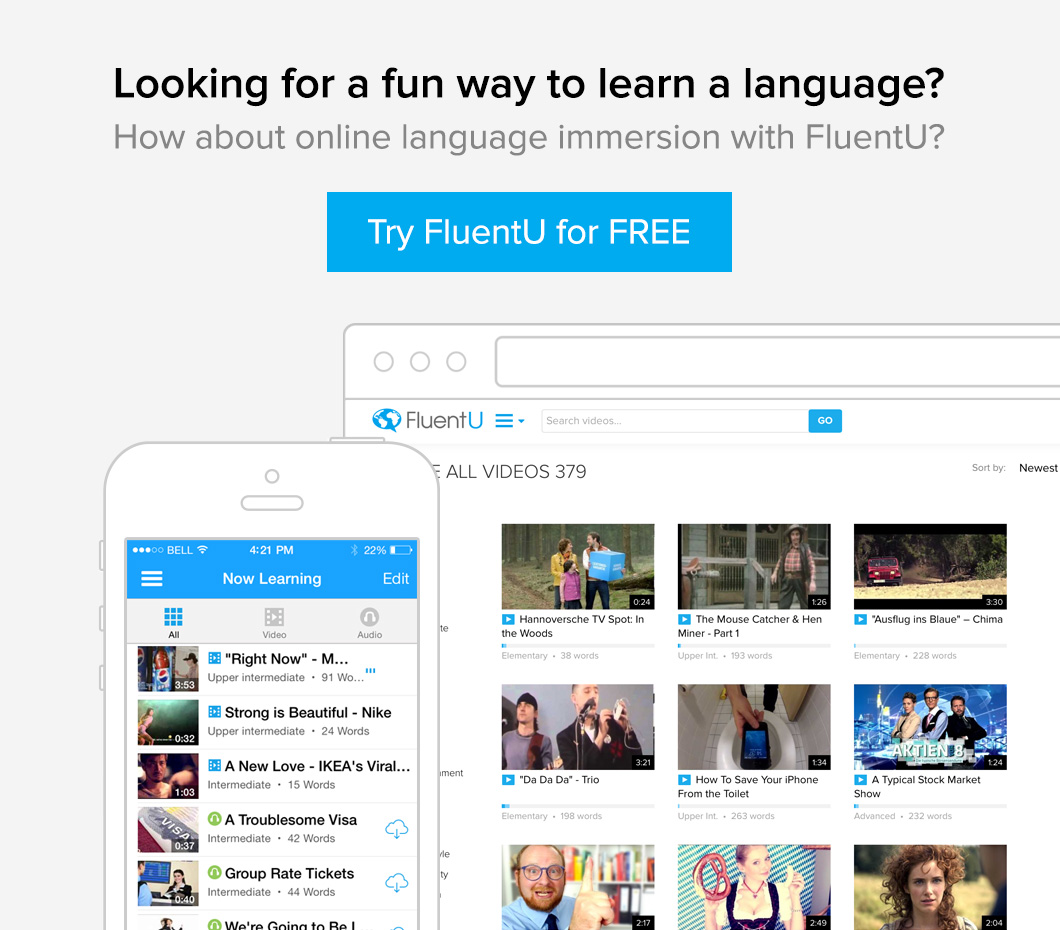