Rocket Korean is a language course that is part of the Rocket Languages series. It claims to teach you how to speak, read, and write Korean in just 20 hours. It also promises to teach the basics of the Korean language, such as greetings, numbers, and phrases.

This Rocket Korean review will tell you what to expect from this program, discuss whether it’s worth buying or not, and delve into the most positive and negative aspects of the course compared to other options on the market.

The full version of Rocket Korean is available with iOS and Android for $79.99 in the United States and Europe for iOS and EU editions.

How we rate Rocket Korean

What to expect from Rocket Korean: A Brief Overview

Below we have listed several points to take into account when purchasing Rocket Korean.

Rocket Korean is an online language course which provides:

The most common criticism of this product seems to be that it does not teach grammar in-depth enough and instead focuses more on speaking and listening skills.

Rocket Korean offers beginner courses that get you from complete novice to intermediate level.

The entire course has more than 120 hours of lesson time divided into 3 distinct lesson types.

Each lesson type is focused on a distinct skill or area of the language. Examples include the audio lessons where a major emphasis was placed on basic conversational terms.

The next type of lesson, language and culture lessons, move deeper into Korean grammar. The language classes introduce the Hangul system, letter by letter.

Short videos show you the stroke order, accompanied by explanations and background information for each letter. A membership in Rocket Korean grants you exclusive access and offers:

👍 More than 378 hours of interactive lessons
👍 Grammar sheets, exercises, tests, videos and audio lessons
👍 Culture lessons to teach you all about Korean customs and traditions

Rocket Languages is a language-learning system for individuals and business professionals.

Its range of language courses provide an interactive audio and video experience, teaching conversational skills in the target language while helping you to learn the alphabet and basic phrases.

For the most part, its courses do not use English speakers or translators, which forces you to actually learn the language as if you were living in a country that speaks it.

Another great feature of the Rocket Languages system is that it teaches vocabulary through context with videos clips.

It also has an adaptive program that allows you to track your progress through user-generated data on the site.

Rocket Languages also has a free trial offer where users can try out one of their courses free of cost. 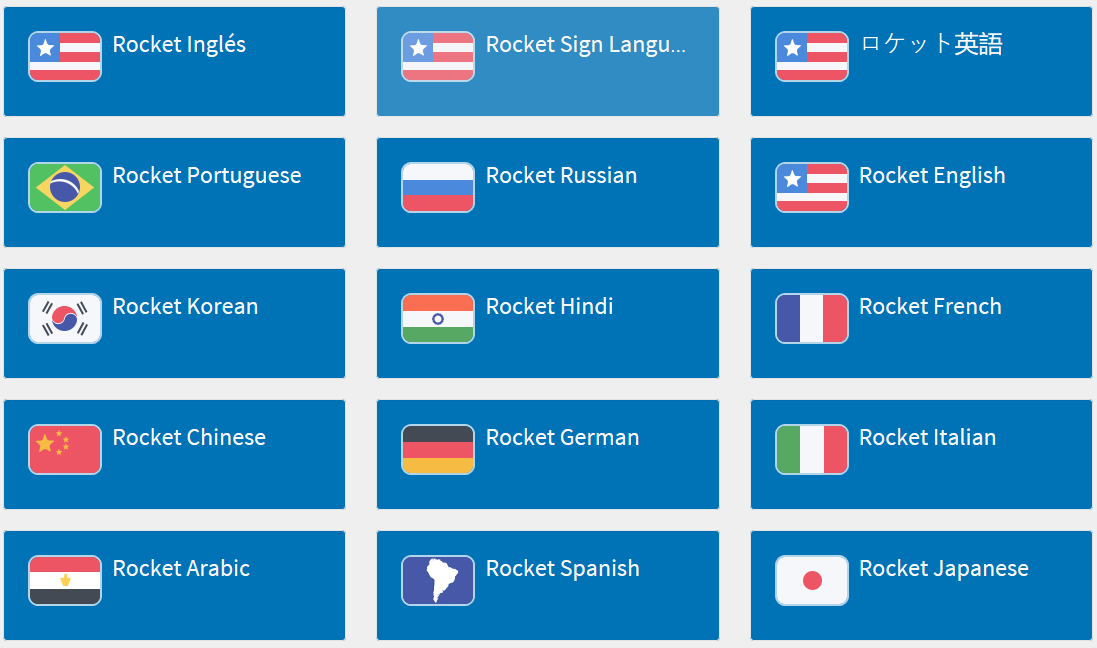 As is also the case with Rocket Japanese and Rocket Spanish, all lessons take approximately 40 minutes in total and can be downloaded as MP3 files for learning while you’re on the go.

The topics are very interesting and focus mostly on useful situations that you may encounter while living or travelling in Korea.

In every lesson there is a section called ‘Rocket Reinforcement’ where ‘you’ll find a sequence of exercises to drill into what you’ve learned.

It is also useful to note that you can switch the difficulty of the Rocket record between easy and hard.

In addition, it also supports turn romanisation (learning in your own alphabet) to or from.

On the learning dashboard there are a range of helpful learning tools. Developers have inserted a memory flashcard function into the program, so you can easily test your knowledge.

Additional tools let you add notes, save useful words into the Vocab bank and test yourself on the benchmark level.

Lastly, the Forum allows you to ask questions and talk to fellow students. There is also a Facebook group within the course that students are able to join.

Rocket Korean Tools: My Progress and My Vocab

The ‘My Vocab’ Feature of Rocket Korean is a dictionary which looks for an English or Korean word in a course and lists its variations in its contextualized and common usage.

You can then listen to the word in a dialogue or sentence. The tool is accessed through the ‘My Progress’ tab within the leaderboard.

From here, you can also take sample exams and benchmark tests.

As you follow lessons and various other tasks in Rocket Korean, you earn points that could move you up the leaderboard, earning badges.

Gamifying competitions that involve big wins as motivation are very useful and appear to work well for those with a competitive streak! Rocket Korean Survival Kit Lessons are an interactive feature of the course which offer students the opportunity to study Korean by looking at pictures, playing games, and practicing Korean vocabulary.

Rocket Korean is somewhat old-school here. Our testers found learning easier when able read words in context, rather than just in isolation.

We are sure you would learn a lot better from context, whether it’s from textbook texts or from reading on language apps such as LingQ or audio lectures from somewhere like Korean class101.

The form of instruction within the Rocket Korean Survival Kit lessons are pretty uninspiring.

It might help a little, but in the end the process becomes a little boring and is easy to forget without contextual examples of other word association exercises, like flashcards.

There are three hosts within the audio course section of Rocket Korean.

Two of these hosts are from Korea and the third from the U.S.

The Korean hosts speak Korean throughout, which is a great way to become accustomed to listening to the Korean language.

The American then explains things in English, which is necessary for beginner and intermediate learners.

The audio lessons often have a dialogue that is then broken down and discussed, providing translations with slowly and clearly spoken words and phrases.

The voice recognition software grading system gives you feedback based on your words and pronunciations.

If you review the additional vocabulary section you will find Rocket Reinforcement activity.

You can see and re-listen to additional information spoken in the Vocabulary section and receive a score. This is one of our favourite aspects of the Rocket Korean Language Course and something which makes it better than many other online Korean language resources.

The language part is a little like that of a textbook, covering vocabulary, important Korean phrases and entry level grammar explanations.

Culture, on the other hand, reveals some interesting aspects of Korean culture and integrates you as best as possible through online means.

There are many audio examples that you can play and practice whilst talking yourself – this is solo study, after all!

These lessons in particular are very thorough and useful.

Learning Korean words and phrases in this way is effective. However, it does not help much with learning how to read Korean.

Whilst we have listed many positive features of Rocket Korean already, we should mention that the writing aspect is not particularly effective.

It’s somewhat strange how so few characters are covered or taught from one lesson to the next.

The course provides you with an opportunity to learn your name in Korean, as well as how to pronounce it.

You also learn how to pronounce each letter. In addition, you’ll receive several examples of other words with these specific characters.

The course’s inability to actually teach Hangeul means that writing in the Korean language remains confusing and rather complicated at times.

Writing lessons in Rocket Korean are one of the least effective components of the course.

Learning the alphabet with Rocket Korean

Rocket Korean is one of the few Rocket Languages courses which focuses mainly on literacy skills.

The course teaches the alphabet in pairs and you can learn at least two words a day through this method.

The videos cover each letter individually, although this is incredibly basic and borderline tedious!

However, overall it covers hanguel well. Within the Rocket Korean alphabet lessons, the teacher slowly writes the letter for you to copy (each video is only a few seconds long).

The teacher then provides some information and examples of the letter being used in different words (plus audio recordings.)

The following are alternatives to Rocket Korean for anybody who wants to learn Korean online.

This course covers the basics of the Korean language, with which you can communicate in a basic manner.

This course is designed for beginners and has four levels. It starts from the alphabet and teaches up to 1500 words which cover all aspects of a conversation.

Memrise is a free app that features a memorization system based on images and sound associations. The courses include text in Korean.”

Duolingo is an app that allows people to learn and practice a second language through immersion. It has a course for learning Korean; with Duolingo, you can focus on grammar and vocabulary, and also do conversation practice.

Duolingo Korean is a gaming application aimed at making learning a language fun. You will find a range of exercises which include filling blank, Multiple Choice and arrange words in order.

Both options provide a basic understanding of the Korean language features. It mainly includes audio lessons, but the software includes quizzes and flashcards too.

Up to three household members can login separately.

Rocket Korean, on the other hand, provides various reading classes, as well as some video and audio lessons.

Learn Korean and link yourself to 75 million people internationally.

The Korean language is considered to being a legacy language by significant populations in Russia, Canada, China, Canada, Brazil and Japan.

Any native English language learner can learn Korean with one of the five main dialects, although the Seoul speech in South Korea is a standard language.

The Korean alphabet, Han’Gul, includes 14 consonants and 10 fundamental vowels. This is one of the many interesting aspects of Korean grammar which makes learning Korean enjoyable.

It dates from the late 15th century and developed to make teaching quick and effective.

It was utilised to create a language that is more easy to understand in a short space of time. Rocket Korean is a language course for learning Korean in 90 days. For $129, you get six 30-minute lessons of instruction, daily revisions, and more.

This course not only teaches you how to speak Korean but also develops your reading and writing skills.

Rocket Korean is more of a practice activity where you learn more about the language as well as how to structure your conversations with native speakers.

The Rocket Korean course is perfect for those who want to learn the basics of speaking and understanding a language.

The price point may seem expensive, but it’s actually quite affordable when you consider that this course teaches you how to speak basic sentences in less than one hour.

However, you need to pay the up front fee if you want full access to the course as there is no subscription option available. James is the founder of travel-lingual.com, this online travel, and language blog. He is a tutor of English, Spanish and French. Furthermore, he has visited 35 countries and has tried dozens of language courses to date, including Rocket Korean.